PEOPLE ON THE WALK

"PEOPLE ON THE WALK" 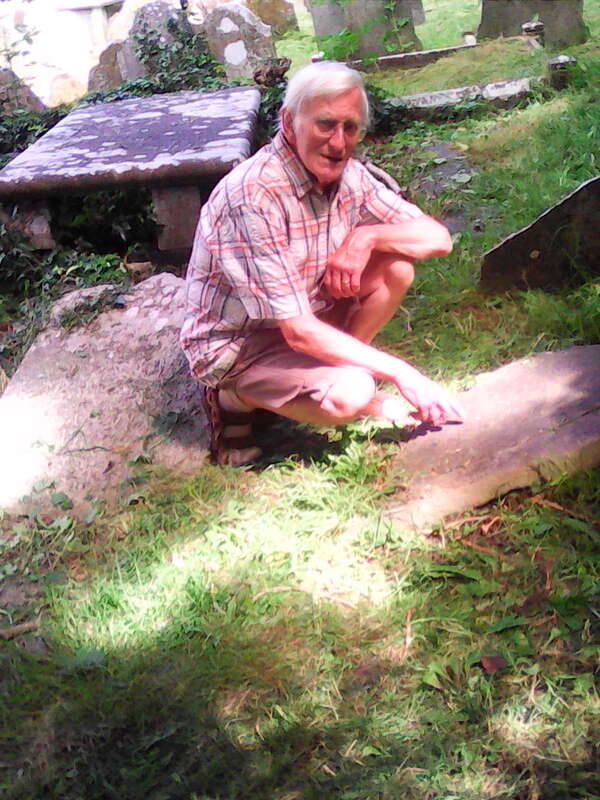 JOHN, MARY, MARIA, EDWARD AND ADIEL MARTIN
As descendants of John Martin we're proud to include "The Martin Family" on Brixham's Walk of Fame.
John was born in 1774 and in 1799 he became an itinerant preacher in the Wesleyan Methodist church serving across Great Britain. In 1805 he married Mary (born 1784) in Northumberland, however, he didn't seek the Church's permission (!) and as a result a further four years was added to his seven year service.

Maria, the couple's oldest child, was born and baptised in 1806 in Leeds.
Their son Edward followed, born in Redruth in 1809. It's possible there was a second son, John, but the evidence for this is inconclusive.

John was accepted as a full minister in 1810 and was stationed for two years in Tavistock. He seems to have been a “fire and brimstone” style of preacher. In September 1812 he was appointed "superintendent minister" in Brixham and in 1813 the couple had another son, called Adiel. This is a hebrew name translating as "God's ornament or God passes by" which has led to speculation that the child might have been physically impaired.

John sadly died when Adiel was only nine months old. He is buried in St Mary's churchyard, Brixham, where his damaged headstone reads ”Sacred to the memory of Rev JOHN MARTIN died 2nd December 1813".
During his ministry in Brixham, John was involved in the building of the Methodist Chapel in Fore Street (opposite Tesco's), although it was not finally completed until three years later.

After John's death Mary and the children moved to Leeds, possibly because of family connections but also enabling Edward to attend the boarding school near Bradford for the sons of Methodist ministers.
Adiel tragically died aged 4 years in 1817 in Leeds.

In 1822 Mary became a governess of the Leeds Free School. In 1825 she married James Hemsley Bell, "master" of the local Lancasterian School. They had another daughter Mary Ann Martin Bell. Mary died in 1829 aged 45.

In 1823, aged 14, Edward was apprenticed to a Leeds firm of carvers and gilders. He moved to Darlington where he married and became a successful and noted furniture maker and art dealer. He retired to the East coast in 1882 and died in 1887.

Maria married a cloth merchant in Leeds and died in 1848 aged 42.
Edward gave Adiel as the second name to one of his children, a tradition that has continued in the Martin Family through the generations.

John's obituary in the Methodist archives reads "A man of the Brixham Circuit, of sound judgment, sterling piety and unremitting zeal".

John and his family lived and served Brixham for a relatively short period of time, but the Martin Family remain proud of their historic and modern association with the town. 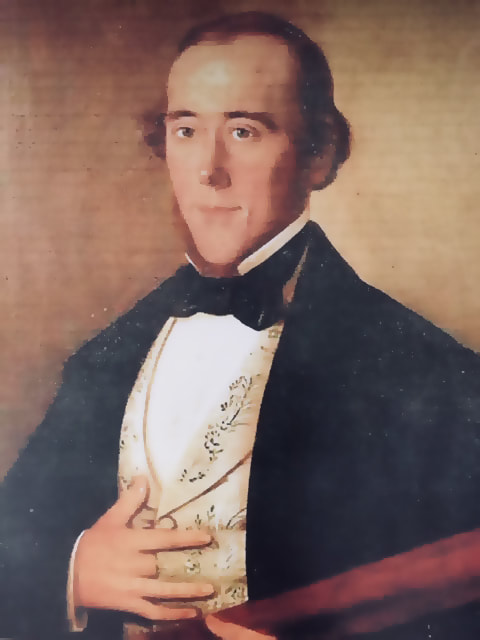 Malcolm is a great great grandson of William Austin (photo above). William was a "Brixham master mariner" who was born in King Street in 1830. He owned a FRUIT SCHOONER named ‘Patriot’ and sailed to the Azores, Mediterranean, West coast of Africa, Caribbean and Newfoundland.

William died of Yellow Fever off the coast of Rio De Janeiro, Brazil in March 1879 on a ship called ‘Lelila’ and was buried at sea. Malcolm has strong links to Brixham and also to the churchyard at St. Mary’s Church, where many of his descendants are buried. There is also a stained glass window there dedicated to one of his other ancestors, the famous Edward Vittery.

Malcolm also has some of the following names in his family tree: Austin, Vittery, Shellabear, Gillard, Laverance, Dewedney, Chant, Wheaton, Blackler, Rider, Mathews, Fogwell etc. most of whom were either land, property, ship yard or ship owners. One was a well known Brixham smuggler, another a trader, one helped found the first bank in Brixham, many were Quay Lords, plus a Lord & Lady of the Manor. Edward himself was British Consulate to Germany. Some streets In Brixham are named after Malcolm's descendants ie. Vittery Close and Gillard Road.

William has been a great inspiration in Malcolm's life after finding all about him whilst researching his family tree. This is why he wanted to be encapsulated in history on the Brixham Walk and wanted it dedicated to William the master mariner and fruit importer.  Brixham's fruit importation business was a huge Brixham trade (consisting of over 300 schooners for half a century in the 19th century), now largely forgotten. 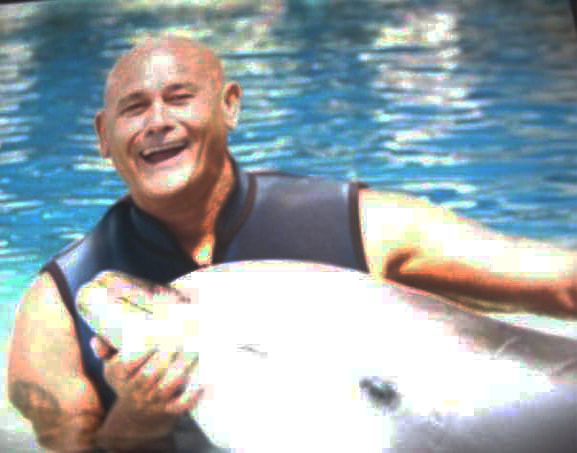 "Max arrived in Brixham in 1979 and opened up a small Barbers shop up St Peters Hill where he was
soon extremely popular. Max became well known for his quick and precise with his barbering skills.
He became known as "Max The Axe".

Customers used to go there for his sense of humour - and he kept his clients well entertained with his many jokes.
Max then moved on to a bigger salon with barbers and ladies hairdressing in Bolton st. Which again was successful.

Max was married for 30 years and had 4 lovely children" . Pat adds "We then separated but were
very supportive of each other for the sake of the family"

Max then opened a small barbers in Dartmouth also a Paignton barbers called "Avitoff" which raised many eyebrows.
It even had a write up in Private Eye magazine!

Max passed away in August, and the family had many messages mostly reiterating that he was "a Brixham legend" who would be sorely missed. Pat felt it important that he was added to Brixham's Walk as one of the "special people" of Brixham. 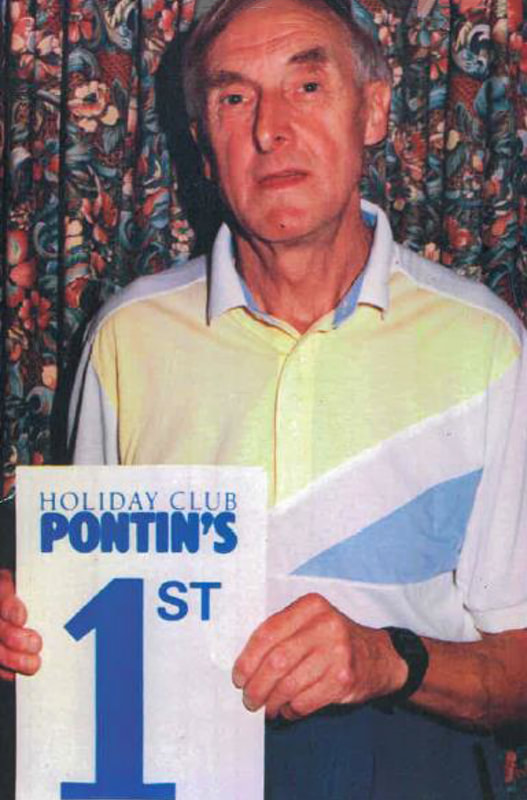 Alf Prescott was very much a family man. He instigated the first of many visits and holidays to Brixham starting in 1979 in Brixham for more than 2 decades.

Alf became the "patriarch" of an ever increasing group of holiday makers and soon was renown for his great sense of humour and his fine voice - mainly singing his idol Frank Sinatra’s songs.

When Alf passed away, he requested for his ashes to be scattered from the end of the breakwater. Of course we wanted Alf to be part of Brixham's Walk. He is now a permanent resident of his favourite town and county. Visiting the plates was extremely emotional, but now offers a never-ending memory of Alf and the town that he loved.

Written by Tony and Jackie Ford (Son-in-law and daughter)